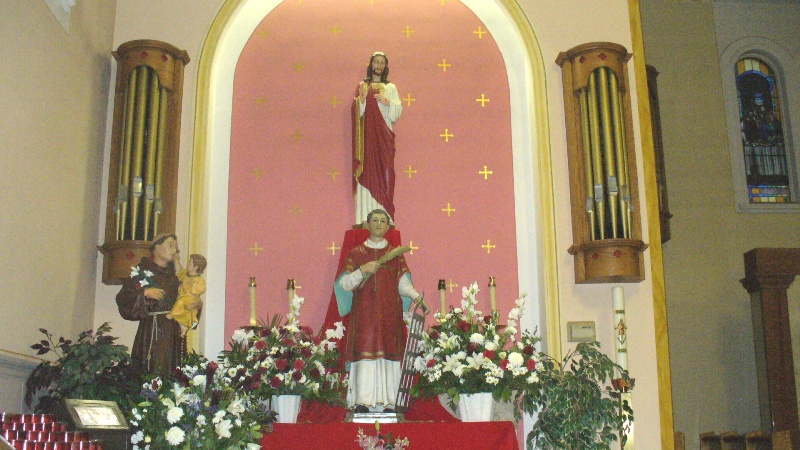 In the beginning, there was a school but no church and the Catholics living within the boundaries of the future church, anxiously waiting for the Archdiocese to appoint a pastor, decided to try and hurry things along by sending a petition to the Cardinal. Surprisingly this soon brought results and in June of 1959, James Cardinal McGuigan, then Archbishop of Toronto, appointed Fr. William F. Breen as the first pastor.

Sunday Masses were celebrated in the high school across the road from St. Lawrence School and continued there until the church foundations were laid and the basement was completed. On May 21st, 1961, the first Mass was celebrated in the church by James Cardinal McGuigan.

Fr. Breen was transferred to another parish in 1967 and a succession of pastors and curates followed.  On June 23rd, 1983, St. Lawrence Parish was given into the care of the Order of Friars Minor (Franciscan) by Gerald Emmett Cardinal Carter. On June 30th 1983, Fr. Ambrose DeLuca, OFM was appointed the first Franciscan pastor. Sadly, he died suddenly in his sleep in 1989.  The second Franciscan to be appointed pastor was Fr. Antonio Nardoianni, OFM. His stay was brief and in 1990, a third Franciscan pastor, Fr. Bartholemew De Simone, OFM was assigned. In 1991, Fr. Ralph Paonessa, OFM was appointed, the fourth Franciscan pastor. During his pastoral assignment he accomplished many major projects. The entire interior of the church, sacristy, hall and friary were renovated and the grounds beautifully landscaped. An elevator was installed for the use of the handicapped. A new heating and air conditioning system was installed. Thirty nine beautiful stained glass windows were added to the church.